The bathroom door squeak can sound rather intense in the middle of the night.  Nothing a little can of WD40 can’t fix.  (side note:  not easily found for a reasonable price) Little did I know I’d be wanting to use same on my brain later today. 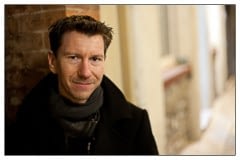 As I was dusting the shelves, the light visible coating on my lenses jolted me. It had been over a month since I photographed with a purpose.  So tonight before dinner, sensing my dismay, M suggested we go out for a shoot.  Why not?  Many of the details in becoming an official French resident were almost complete.

The goal was to use existing street  and window illumination for the images…and attempt to consistently set a correct white balance as we moved to new locations.

Well we were both reluctant subjects…but well …we were all we had.

Looking for the light, juiced me up but all my images of M were rather the same – nicely composed but still in the “box”.   So I’m just a little rusty.

I was quite taken by the one of me that was a “mistake”.

What do you think?